Whales and dolphins emerge from the water and offer a show that you can witness. It is the favorite place of humpback whales and several types of dolphins, this park turns on and off in a natural scenery where these animals can be observed. Humpback whales come every year (July to October) to carry out […] 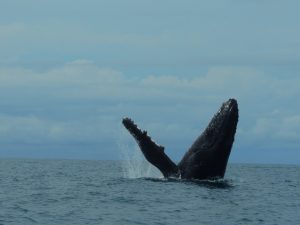 Whales and dolphins emerge from the water and offer a show that you can witness. It is the favorite place of humpback whales and several types of dolphins, this park turns on and off in a natural scenery where these animals can be observed. Humpback whales come every year (July to October) to carry out their reproductive cycle; they arrive at the Park’s place where there is a rocky and sandy formation that resembles the tail of a whale. This curiosity is the main attraction of the place. 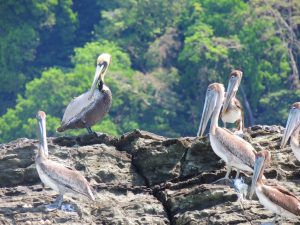 Inside the Park you can visit the tómbolo (whale tail), go and enjoy the beaches or practice superficial and deep diving to see a huge range of marine life. You can also enjoy the calmed sea that bathes these shores or boating on nearby islands. In addition to the humpback whale, they can be found in its waters species like the spotted dolphin, bottlenose dolphin, manta ray, hammerhead sharks, parrotfish, and mackerel. “Take advantage of your visit and enjoy the attractions of the area, such as horseback riding, canyoning, and waterfalls,” said Gallardo. The Marino Ballena National Park has 4 official access routes for the enjoyment of visitors, all are located by South Inter-American Highway: Uvita, Colonia, Ballena, and Piñuela.

​Created: On June 9, 1992, the creation of the park was legitimized with Executive Order No. 21294-MIRENEM
Area: 5,160 marine hectares and 171 terrestrial hectares, with a coastline of 9,3 miles (15 km) long
Weather: Hot, rainy and very humid
Dry season: From mid-December to mid-April, with sporadic rains.
Rainy season: from mid-April to mid-December.
The Marino Ballena National Park was established in 1989 but the first decree was repealed in 1990, and in 1992 it was legitimized with an approximate land area of 5331ha. It was the first marine park in Costa Rica and Central America, the first protected area created exclusively for their marine resources. It has about 9.3 miles (15km) of the beach and its land area is only the range of 164 public feet (50 public meters).

La Cola de la Ballena (Whale Tail): It is a natural rocky and sandy formation caused by the sedimentation generated by tides. You can only visit it during the dry (low) tide. The shape of the tail can only be seen from high parts or doing a flyby. It is also known as the Tómbolo and the passage of Moses.
Isla Ballena: Located about 1.24 miles (2 km) from the coast, it is a rock formation that houses some species of birds and iguanas. In its vicinity, there are coral reefs.
Tres Hermanas Islets: They are three rock formations where nesting birds are also given.
Beaches: In addition to Uvita, where the Tombolo is located, there are other beaches within the Protected Wilderness Area: Bahía, Colonia, Ballena, Arco, and Piñuelas.
Snorkeling: You can perform this activity during low tide near the tómbolo or whale tail, just mask and snorkel is permitted, diving fins are not allowed.
Whale watching: Humpback Whale watching in season (July to November) and resident dolphins throughout the year in the area. 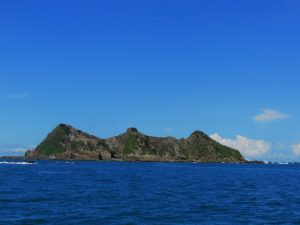 How to get there:

From San José to José María Castro Madriz 27 Caldera Highway deviates in Costanera Sur road, Route 34 Pacífica Fernández Oreamuno or Interamerican Highway that goes to Paso Canoas, about an hour after the entrance of Quepos and on the road take the turnoff according to the site to visit.
Source of the Article – SINAC: http://www.sinac.go.cr/EN-US/ac/acosa/pnmb/Pages/default.aspx

This country regrew its lost forest. Can the world learn from it?