This country regrew its lost forest. Can the world learn from it?

By Nell Lewis, CNN Updated 1902 GMT (0302 HKT) July 27, 2020 . Costa Rica’s lush rainforests are home to hundreds of rare species. Endangered great green macaws, with wingspans of up to 90 centimeters, raucously fly through the canopies. (CNN) – Pedro Garcia nurses a plate of seeds on his lap. “This is my legacy,” […]

Costa Rica’s lush rainforests are home to hundreds of rare species. Endangered great green macaws, with wingspans of up to 90 centimeters, raucously fly through the canopies.

(CNN) – Pedro Garcia nurses a plate of seeds on his lap. “This is my legacy,” he says, tenderly picking up the seed of a mountain almond — a tree which can grow up to 60 meters (200 feet) tall and is a favored nesting spot for the endangered great green macaw.

Aged 57, Garcia has worked on his seven-hectare plot, El Jicaro, in northeast Costa Rica’s Sarapiqui region for 36 years. In his hands, it has turned from bare cattle pasture to a densely forested haven for wildlife, where the scent of vanilla wafts through the air and hummingbirds buzz between tropical fruit trees. Garcia has restored the forest — home to hundreds of species from sloths to strawberry poison-dart frogs — while also cultivating agricultural products from pepper vines to organic pineapple. This makes him self-sufficient but it does not turn a profit. Instead, Garcia relies on ecotourism –he guides biologists and ecologists around the plot for a small fee — and payments for ecosystem services (PES), a scheme run by the Costa Rican government that rewards farmers who carry out sustainable forestry and environmental protection.
. 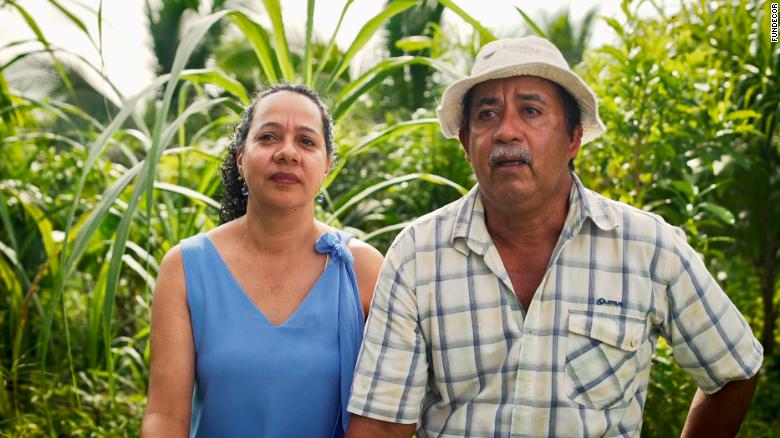 Pedro Garcia and his wife Adilia Villalobos are passionate about looking after nature.

Garcia is one of many Costa Ricans who have powered a mass conservation movement across the tiny Central American country. While most of the world is only just waking up to the importance of trees in battling the climate emergency, Costa Rica is years ahead. “It is remarkable,” Stewart Maginnis, global director of the nature-based solutions group at the International Union for Conservation of Nature (IUCN), tells CNN. “In the 1970s and 1980s Costa Rica had one of the highest deforestation rates in Latin America, but it managed to turn that around in a relatively short period of time.” Costa Rica is the first tropical country to have stopped — and subsequently reversed — deforestation. Can the rest of the world follow its lead?

When Costa Rica lost its trees

In the 1940s, 75% of Costa Rica was cloaked in lush rainforests. Then the loggers arrived, chainsaws in hand, and cleared the land to grow crops, and raise livestock. While there is an ongoing debate about the extent of reduction, it is thought that between a half and a third of forest cover had been destroyed by 1987. Soon after this all-time low, the government took a series of radical actions to convert the country back into a natural paradise. In 1996 it made it illegal to chop down forests without approval from authorities and the following year it introduced PES. Today almost 60% of the land is once again forest. Cloud forests envelop the country’s mountain peaks, thick rainforest lines the beaches of the south and dry forest sweeps the northeast. This rich landscape is home to around half a million plant and animal species.
.

But the country’s reversal is in stark contrast to the rest of the tropics, where deforestation rates are soaring. In 2019, tropical regions lost almost 12 million hectares of forest, according to data from the University of Maryland — equivalent to 30 football fields a minute. Nearly a third of that loss occurred within older, carbon-rich primary forests.
Other countries have made ambitious commitments but “if restoration is only replacing losses from ongoing deforestation, then it may be better than nothing, but it’s a bit of a Band-Aid,” cautions Maginnis.

Costa Rica’s success is underscored by economics. It paired its ban on deforestation with the introduction of PES, which pays farmers to protect watersheds, conserve biodiversity, or capture carbon dioxide. “We have learned that the pocket is the quickest way to get to the heart,” says Carlos Manuel Rodríguez, Costa Rica’s minister for environment and energy, adding that people are more likely to take care of nature if it provides an income. Elicinio Flores was 22 when a government scheme granted him a 10-hectare plot of land in Sarapiqui. When he arrived in 1976, it was “untouched,” he says. “There were no paved roads, no access to drinking water. It was difficult because you couldn’t make a living from the forest then,” he tells CNN.
. 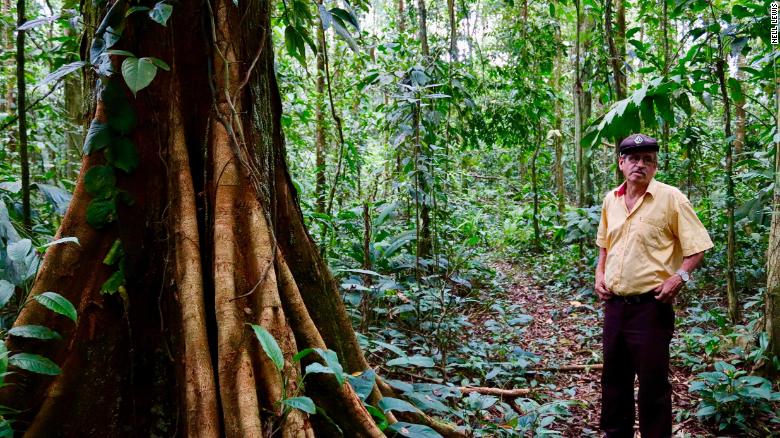 Elicinio Flores walks through his patch of rainforest daily, proud of what he has preserved.

Working with neighboring families, he cleared the trees and created open pastures divided by fences, where cattle now graze on dusty grass. But in the middle of his farm, Flores decided to preserve a five-hectare pocket of the original forest. Despite occupying a small area, it’s a dense and tangled jungle — walk into it and it’s hard to believe there’s agricultural land on all sides. Flores has since expanded his forest, replanting two more hectares of trees with help from the PES scheme, which pays an average of $64 per hectare per year for basic forest protection, according to FONAFIFO, the nation’s forestry fund.
The scheme allows farmers to generate additional income by selectively harvesting timber from the reforested areas. Flores seeks guidance from Fundecor, a sustainable forestry NGO, to ensure he only fells trees that are not vital to the ecosystem. Timber sales have helped pay for his eldest daughter’s university studies in sustainable tourism. “I feel proud when I walk through the forest, not only for me but for my whole family,” he says. “When I am no longer here, I know that my children will continue to look after it.” The government scheme, which is financed predominantly by a tax on fossil fuels, has paid out a total of $500 million to landowners over the last 20 years, according to FONAFIFO. It has saved more than 1 million hectares of forest, which amounts to a fifth of the country’s total area, and planted over 7 million trees.
.

According to Maginnis, Costa Ricans’ deep respect for nature has played a vital role in the country’s reforestation success. Its culture is summed up by the national motto, “Pura Vida,” which is used as a greeting, a farewell, and in many other social contexts. While its direct translation is “pure life,” “Pura Vida” signifies much more than that — both gratitude and peace with oneself and the surrounding environment. This respect is reinforced by the country’s booming ecotourism sector says Patricia Madrigal-Cordero, former vice-minister for the environment. “People come to see the mountains, the nature, the forests, and when they are stunned by a monkey or a sloth in the tree, communities realize what they have here, and they realize they should care for it,” she tells CNN.
. 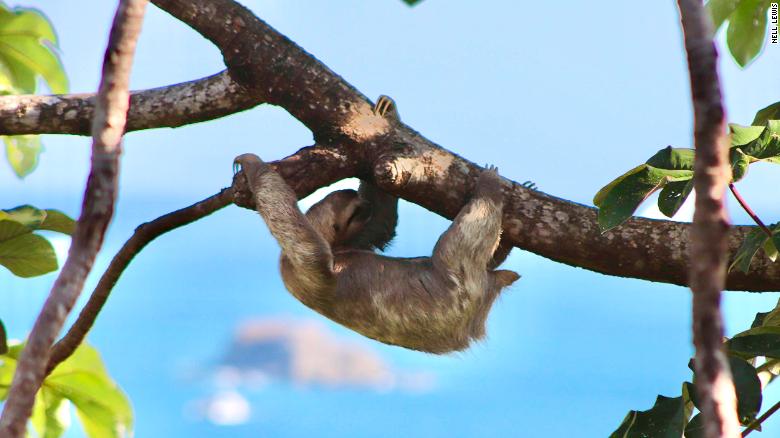 Many visitors to Costa Rica are keen to see a sloth, a tree-dwelling mammal renowned for its slowness.

The nation of 5 million people welcomes around 3 million visitors a year. According to its tourism board, more than 60% choose Costa Rica for its nature, with many flocking to the country’s national parks — which, alongside other protected areas, cover more than a quarter of the country’s landmass. Last year, tourism generated almost $4 billion in revenue for the country. The industry accounts, both directly and indirectly, for more than 8% of GDP and employs at least 200,000 people. “People in Costa Rica receive a lot of money because of tourism and that changes the incentives of land use,” says Juan Robalino, an expert in environmental economics from the University of Costa Rica. While neighboring countries have similarly stunning landscapes, they attract far fewer tourists, he says. In 2018, Nicaragua, a country more than double the size of Costa Rica, welcomed less than half the number of tourists. Without the tourists, communities put less effort into preserving the environment, says Robalino. This creates a downward spiral — with less revenue, funding for conservation drops, which leads to less ecotourism.
. 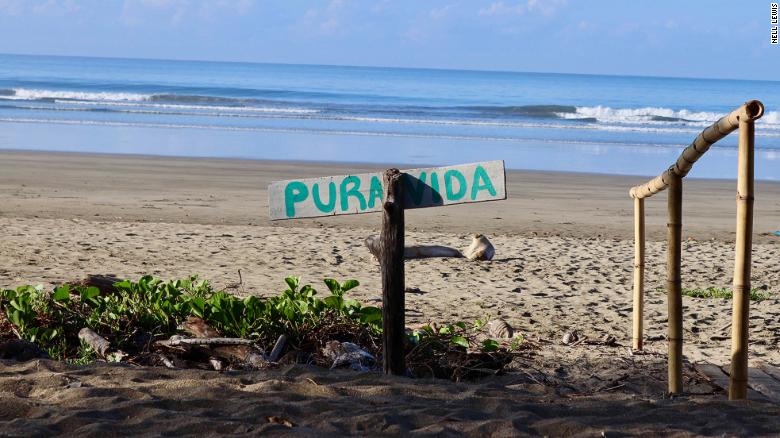 Tourists flock to Costa Rica for its pristine beaches, wildlife, and to experience “Pura Vida.”

Other countries do not necessarily lack environmental will. Guatemala, Mexico, Rwanda, Cameroon and India are among those that have committed to restoring at least a million hectares of forest through the Bonn Challenge, a global effort that aims to restore 350 million hectares of degraded ecosystems and deforested land by 2030.
But these countries lack Costa Rica’s long history of environmental policy coherence and consistency, says Maginnis. It is this combination of political will, environmental passion, and tourism that has enabled the country to become a pioneer in reforestation. Rodríguez, the country’s environment minister, says that while Costa Rica’s basic strategy could be applied anywhere, “principles and values” need to be in place too. These include good governance, strong democracy, a respect for human rights, and a solid education system, he says. The secret to Costa Rica’s success is its people, adds Madrigal-Cordero. “We have created peace, Pura Vida”, she says. “Nature is in our DNA.”

Source of the Article: Call to Earth – CNN Travel: https://edition.cnn.com/2020/07/27/americas/reforestation-costa-rica-c2e-spc/index.html